This is an assortment of bits and pieces I’ve wanted to blog about, but, given the ever increasing Pile of Matter Important sitting over there in the corner, I probably won’t. Maybe I’ll come back to them.

First, my blog post of a couple of days back on gun statistics made me wonder, in contemplation, whether the number of mass murders could be used as a surrogate for Readily Available Violence, and, failing that, number of firearm suicides and homicides. Whichever measure is used, the little project I wanted to do, and still may someday, is to try to fit that to a Bass diffusion model for product introduction. Now, in practice, this would be basically repeating Jim Duggan’s work with Bass diffusion using deSolve, albeit on death data, but it would let me play with deSolve for a bit, which I’ve long wanted to do, and would let me see how hard estimating coefficients in Bass diffusions actually are. What’s the product here? Well, it’s not deaths. I felt that if I could back out the growth rate of such a product and then, say, match it with estimates of gun availability that might take a step in establishing a(nother) causal link. But, we’ll see.

Second, and speaking of things causal, out of some frustration with what passes as acceptable time series study these days (see also), and the tendency to throw lots of data at algorithms which “thrive on noise”, I whimsically chased down Kantz and Schreiber’s Nonlinear Time Series Analysis (2nd edition, 2005 reprint, Cambridge University Press), as backed by the R package nonlinearTseries. I’ve written about Professor George Sugihara and colleague’s convergent cross mapping before, but never delved into this approach to things any further. There is an update of the field by Bradley and Kantz from 2015, which appeared in Chaos, but I was mostly interested in seeing how practical this kind of stuff was. I had read reports here and there that naively done CCM was unstable, but I want to see. I’ll let you know what I learn. 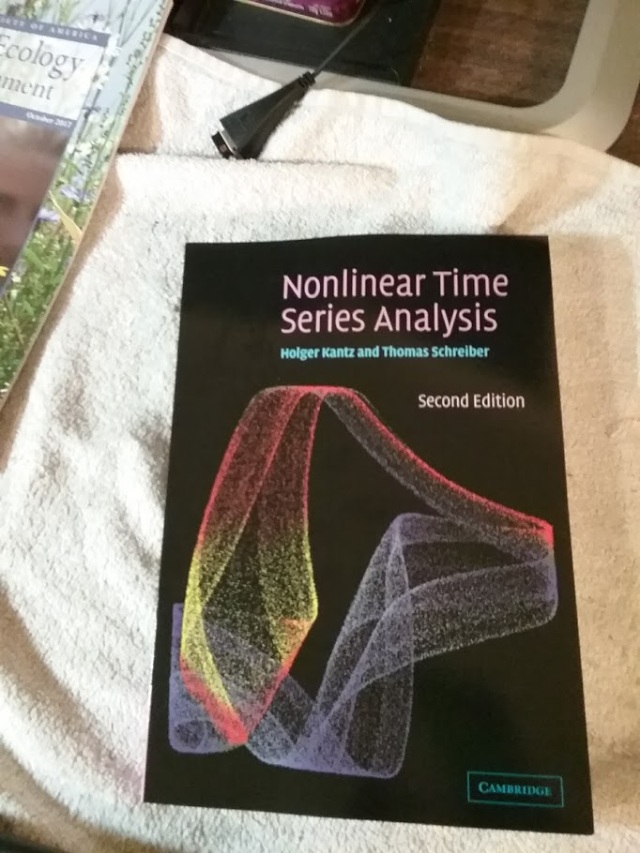 Third, I have a large stack of technical papers to read, some work-related, mostly statistics- and climate-related, with an emphasis upon oceanography and engineering. This includes things like T. L. Thorarinsdottir, P. Guttorp, M. Drews, P. Skougaard Kaspersen, and K. de Bruin on “Sea level adaptation decisions under uncertainty” from 2017, Benjamin Fish, Lev Reyzin, and Benjamin I. P. Rubinstein on “Sublinear-Time adaptive data analysis”, and Martha W. Buckley and John Marshall on “Observations, inferences, and mechanisms of the Atlantic Meridional Overturning Circulation: A review”.

Fourth, I’m inching through a chapter of O. C. Ibe’s Elements of Random Walk and Diffusion Processes, specifically, his 9 on “Fractional Calculus and its Applications”. I want to understand that, and things like Hosking’s 1981 paper on “Fractional differencing” (from Hydrology), but I’m also intrigued with the possibility of using Levy walks (Ibe’s Chapter 8) to search Bayesian posteriors and do other kinds of stochastic optimization. In fact, I’ve outlined a paper along those lines, but I need to master some mathematics first before I’m ready to proceed.

Happy holiday weekend everyone. I know there’s been a lot of racial inconsideration for indigenous peoples and the like, and I try to act to what the best current sense of how to respect peoples is, but it’s easy to trip on labels. Sure, labels can hurt people’s feelings. But, in my training and world, what you name something has no effect on what it is or how it behaves. And I’m concerned that an overemphasis upon Proper Naming is a step down the path of acting as if there’s any substance to Grounded Theory, or as if there’s any validity in something I read by a Trump supporter a day ago, that because they won the Presidency, they could now dictate what constitutes truth.

See https://667-per-cm.net/about. Retired data scientist and statistician. Now working projects in quantitative ecology and, specifically, phenology of Bryophyta and technical methods for their study.
View all posts by ecoquant →
This entry was posted in scholarship. Bookmark the permalink.