(Comment on prediction intervals for random forests, and links to a paper.)

There are lots of ways of learning about mathematical constructs, even about actual machines. One way is to push them into a place of improbable application, asking of them things which seem implausible, and watch how they fail. Indeed, they might not fail.

Many of the engineers from the NASA Apollo era spent their spare time with simulators of the CSM and LEM to develop a “feel” for what these machines could do and when they got into trouble. This allowed them to understand their capabilities beyond their formal specifications. This is quite possibly why Jack Garman was able to give the go-ahead for the Apollo 11 lunar landing, given a section of code was patched out, despite the overload of the LEM’s guidance computer from its rendezvous radar being set erroneously on in addition to the doppler landing radar.

Random forests were originally devised by Kleinberg and Ho (1990-2000), and then extended by Breiman, Cutler, Amit, and Geman. Breiman and Cutler are most frequently associated with these important statistical learning devices. They can be used for classification, regression, and variable selection. They can also be used for clustering.

Regression with random forests can be done on the same data that linear or generalized linear regression are done. Whereas the latter two means of calculation offer some continuity conditions which justify how one might use the outputs of their models to calculate, say, derivatives of responses with respect to predictors, it is less obvious how this might be done with random forests.

So, to set the stage, we begin with an application of random forests to time series. In fact, the series in question is reasonably famous, being the Air Passengers dataset introduced by Box & Jenkins and featured in the R package called forecast which, in its most recent rendition, offers the clever function

as a means of automatically building ARIMA models for such series.

The plan is to regress with

After this post was written, I discovered the exciting paper …

It is also realized in the standalone R package rfinterval based upon the excellent ranger package.

In this paper, Zhang, Zimmerman, Nettleton, and Nordman overcome the evidence dearth problem encountered by quantile regression forests when trying to estimate prediction intervals, using a technique closely related to the conformal prediction methods in

Since the R forecast package has been mentioned, the ranger package should be introduced as the one which will be used to train and test random forests, where, for those unfamiliar, training is a calibration process. Other packages have elements which are critical to this development, namely, the random, coda, and fda.usc packages.

And, incidentally, the code and some supporting files from this blog post are available here.

How can anything be done with a set of dependent data like a time series using random forests? After all, random forest ensemble methods do not in themselves have any inherent applicability to dependent data. Response-covariates sets are considered independent of one another. But, what can be done is mimic the ARIMA setup. Define a set of covariates for a response

in a series to be the union of the some subset of lagged values of the response, such as

, with some subset of lagged moving averages of the response. These are, in fact, for ARIMA, the basic features of the series which are used, along with some spectral theory, to produce the methods ARIMA employs.

In other words, the matrix of candidate covariates for responses looks like, for 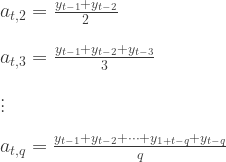 are averages of response values from

is the median of

Why not use ARIMA? Any parametric method brings assumptions to a problem and the point of non-parametric methods, even modern ones like random forests, is to relax the assumptions that otherwise might be needed for estimation and prediction without costing too much. With random forests, there are ancillary benefits, like variable selection. Specifically, rather than choosing an order based upon autocorrelations and the like, as is the practice with random forests work, big a high number of lags and moving averages and let preliminary grows of a random forest indicate which are important for explaining the series.

It’s to be expected there will be drawbacks.

Nevertheless, it’s easy to see how random forest approaches to analyzing series might be useful. They are insensitive to natures of distributions, they are flexible to use, and, in contrast with some other statistical learning methods, comparatively transparent. Forests trained on different datasets can be merged and consolidated.

is constant for any given series, it won’t be predictive in any fashion so could have been left out of the covariates matrix. However, were the forest trained on additional series, having differing medians might become predictive. Note that this implies both variable selection and regression with a reduced variable set need to be done on new data series. Note as well merging of forests may have to be done with the full original parent set of variables rather than with the reduced set in that case.

Right out of the gate, here’s how one random forest compares with the result from

The quality is entirely comparable to the ARIMA result. Note a check of the lags and moving averages picked by

shows little overlap with what the random forest elects. What that means for the interpretability of Air Passengers behavior for one or the other of the techniques is beyond the scope of this blog post, but it poses an interesting scientific question.

The forest was produced as a result of a seven step process. Note that prior to building forests or any other step, a replica of the original series is made which is centered and scaled. In other words, the mean,

, of the original series is calculated, and a transformed version of the series

is used in place of the original. This recentering is standard practice for good statistical and numerical properties. Results coming out of the model can be transformed back into the original measure by multiplying them by

First, a forest of 100,000 trees was grown to ascertain importance of predictors using permutation importance measures. Other details will be given below[3].

Second, a forest of 100,000 trees was grown to do the regression using the selected set of variables, and resulting in the figure above. The resulting

Third, the forest produced in the second step is used to make predictions for all the time points observed. These are used to produce a baseline series for the estimate of Air Passengers over time, and the estimates for that quantity’s first and second time derivatives.

Fourth, the forest produced in the second step is used to make predictions using each of the trees in the forest for all the time points observed. These are used to develop prediction errors in estimates of quantity, and its first and second time derivatives.

Fifth, whenever derivatives need to be estimated, the B-splines technique in the fda.usc package is used.

Sixth, uncertainty estimates in quantity, and its first and second time derivatives are obtained by bootstrapping the full set of individual predictions in the third step above. Each bootstrap of the (here) 200 bootstrap samples results in 100,000 time series predictions, one for a tree in the forest. (Because bootstrapping entails sampling with replacement the same series might be elected multiple times.) The value of the

time point in the resulting series is the mean of all 100,000

functions are used to produce them, using the 200 estimates at each time point.

Seventh, results are compiled and plotted.

is the number of predictor variables. Initially that was 108 predictors, including 51 lagged responses, 1-51, 53 moving averages, for training windows of sizes 2 to 54, and the median value for the entire series. So, initially,

. After variable selection, with normalized variable importance scores having to be greater than 0.005, there was 31 variables used for regression. These included 7 lagged responses and 24 moving averages. Lags 1, 2, 3, and 33-38 were considered important by this criterion. The moving average windows of lengths 2-11, and 38-48 were considered important. This means for the regression,

The minimum node size specified was 5. The “extra trees” splitting rule was used for both variable selection and regression. Up to 10 random trees per predictor were considered. The depth of trees was unbounded. Inbag errors were kept. 100,000 trees were generated for each forest.

The uncertainties about the predicted trace are difficult to see because they are small. Recall these are prediction errors. To give an idea, the next figure shows a portion of the same with a lens distortion applied:

The following shows a close-up of the same for a limited interval.

I have changed my mind regarding that last paragraph. The perspective inherent in the regression forest approach above is atypical for many applications of random forests or, for that matter, statistical learning methods. There’s less emphasis upon prediction as a goal, and more on simply characterizing a given dataset. Accordingly, performance of a forest out-of-sample is less important than fidelity to a series of responses in sample. In this respect, random forests are being used very much like spline interpolators and, so, serve as the basis for calculating other numerical aspects of them, such as derivatives.

This consideration leads to a couple of other questions appropriate for investigation: