Who the heck is Robert Rio? And what does a B.A. biologist-turned-attorney know about solar energy?

The Associated Industries of Massachusetts have turned their gunsights on the solar energy industry of Massachusetts, attempting to destroy it. They are lobbying Beacon Hill to not only cap rollouts of solar, but nix net metering, and, if patterns in other states are precedents, to penalize citizens of the Commonwealth for having had the foresight to install solar by assigning them special monthly costs which people having no other energy source have to pay.

Who are these guys?

Well, first, AIM has opposed solar energy and renewable energy for a long time, dating back to at least 2013. (Some of these letters will be reproduced below.) They are fans of methane pipelines, of keeping workmen’s compensation low, of imposing higher standards for safety, e.g., asbestos, and, generally speaking, applauding a regression to the national mean, thereby reducing many sensible and Massachusetts-specific regulations. Their President and CEO, Robert Lord, is a perfect example of the Revolving Door of government and lobbyist, having served as Chief of Staff for the Committee on Ways and Means of the Massachusetts House of Representatives. (Gee, I wonder why Speaker DeLeo is opposing a solar expansion so vigorously? Job interview?) Their headquarters are located adjacent to the State House. You can see what their point guy on solar says in letters below, but let’s take some of their claims and look at them ….

Claim: “According to studies done by the state Department of Energy Resources (DOER), generating renewable energy through solar currently costs about 39 cents per kilowatt hour (kWh). Non-solar renewables can be produced for an average of 4.5 cents per kWh.”

This is misleading or, at worst, false. AIM does not document their sources, from DOER or anywhere else, and their claim regarding “[n]on-solar renewables can be produced …” might be for anywhere in the world, not in Massachusetts. In fact, elsewhere on their pages pertaining to solar power, AIM states that “solar only produces 7% of the clean energy”. That’s wrong: In Massachusetts it produces one full third of the clean power, but it is true that only 9% of total power comes from what are considered, in Massachusetts “renewable energy”. (Don’t confuse that with zero Carbon energy. It includes waste-to-energy facilities, and biofuels, which are highly questionable in that role.) Facts are, solar cannot be responsible for Massachusetts high energy costs, because it only contributes to a third of the total energy. In fact, the reason why Massachusetts residential energy costs are 22% higher than the national average is because Massachusetts is 22% colder than the national average.

To see larger image, click on image. Then use your browser’s Back Button to return here.)

Also, because Massachusetts does not get most of its energy from solar, at present, its high cost of energy comes from whatever the existing infrastructure costs.

Indeed, it’s conceivable that had the AIM not opposed solar rollouts so fiercely (see below), maybe we would have had more inexpensive solar and wind energy than we do. Note, conservative Texas has loads more of both, even given the fact that Massachusetts near shore wind assets are much better. (Massachusetts solar assets are 70%-85% as good as Texas, depending upon what’s counted.)

(It must be on sale: AIM previously claimed the subsidy was $9 billion.)

As mentioned above, AIM does not specify where they get their figures from and, so, they expect to be simply trusted. But they clearly have a bias against solar, based upon the historical record. Note what Mr Rio says in a Comment from that blog post, in response to a question:

Lance: Utilities do not make any profit on selling the actual power as they do not generate any power. the utilities buy power on behalf of customers and pass through the cost with no markup – zero.

Where they make money (subject to DPU approval) is charging for the wires – distribution. However, they don’t lose money if people generate their own power. The amount that that company would have paid is basically pushed on to everyone else. These are fixed costs that the utility is obligated to pay to maintain the system for days like today when all the solar people are using it.

Example – if the distribution system and fixed costs cost 10 dollars and there are 10 customers using the same amount of electricity each effectively pays 1 dollar. If one goes to solar or onsite generation, the other 9 split the same 10 dollar cost. Nothing changes. Really, they are mostly indifferent to the use of power.

Now maybe in a few decades that model will change, but if the utility is obligated to maintain the system for everyone regardless, then the fixed costs will be paid until the point where the fixed costs become lower (i.e. people disconnecting from the grid). A solar person is not disconnected from the grid, even when they are generating power.

The utilities are not paying the subsidies either – all those subsidies get distributed to the others on the grid. As to non-profit utilities – also called municipal light companies (MLPs) – there are 41 in Massachusetts alone.

Second, the mechanism whereby utility electricity production costs are paid for is itself a huge subsidy, it’s just not being accounted for in that manner by AIM’s accounting mechanism. They isolate a portion of the SREC system and, presumably (can’t tell because they don’t explain in detail), the net metering system, and claim it is $8 billion, but all the costs of operating the utility, because they are a pass-through, are claims as the “cost of doing business”.

Third, the utilities often pass on the development of electrical wirelines and methane pipelines onto their ratepayers, as was recently approved by DPU. But AIM is not calling that a subsidy. Methane pipelines cost in excess of $1 million per mile to build. In contrast, capital costs for solar generation, whether by subscription to a solar community farm, or by a homeowner doing their own solar panels, are paid for by those individuals, not by ratepayers. There’s no assignment of benefit by AIM against that $8 billion for this capacity or, for that matter, for the benefit of the federal taxpayer offsetting these capital costs by the ITC (which, contrary to AIM’s advertising, has been extended by a conservative, business-loving Congress).

Fourth, Massachusetts prices for methane are already among the highest in the United States, despite having ample demand (59% of electricity already is generated from methane) and supply terminals (Everett). Yet, AIM proposes building additional pipelines, claiming this will make the cost cheaper.

Fifth, methane production and delivery is provided handsome subsidies and tax breaks by the federal government. Sure, solar and the like has the ITC but, for all I know, that might have been included in the AIM’s calculations to get their $8 billion.

Ironically, in 2014, AIM itself took shots at methane and pipeline construction, in addition to their opposition to non-utility zero Carbon energy. See their letter of 2014 below. Of course, had AIM, hypothetically and counterfactually, gotten behind Cape Wind and solar, their complaints that “…renewable power has been a failure as a significant source of energy in Massachusett” might have been different. Surely, given their opposition to solar from 2013 and before, it’s fair to judge their approach as trying to strangle it in its cradle. 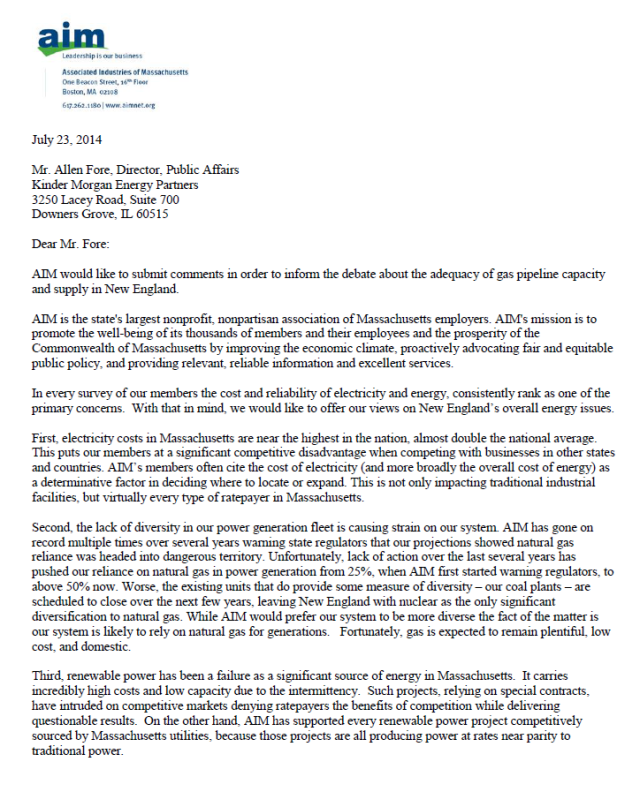 So, to ask again, who are these guys? A definitive list of members is not available on the AIM site, but the officers, executive board, and their affiliations are available. Here are the companies. I would suggest that, wherever possible, if you support solar energy in Massachusetts, you do not do business with these firms. And, if you can’t avoid it, how about letting them know you don’t appreciate their opposition to solar energy?

Some of them are pretty surprising: General Electric bills itself as a sustainable energy company …. Obviously, not for homeowners.

Some of them are easy to avoid: Wal-mart. And no more Harpoon beer for me. And what are all those attorneys and consultants doing on the list? And who do they represent who don’t want their names known?

Finally, back to the question where I began: Who is Robert Rio?

Karl Rabago gave a presentation to the Rhode Island state legislature which refutes a number of the claims which Mr Rio makes.

4 Responses to Who the heck is Robert Rio? And what does a B.A. biologist-turned-attorney know about solar energy?