As State Senator, I fought and opposed Spectra’s proposed compressor station in North Weymouth. As Mayor, I took a hard and proactive stance in opposition to the proposal, ramping up our legal challenge. No community has ever waged this aggressive and pro-active a fight against such a proposed facility – and under my watch, we will continue to do so!

I will continue our unrelenting fight against this ill-conceived and unwanted project. In the end, there is no offer or argument that can justify the siting of this compressor station in North Weymouth. It’s the wrong project in the wrong location.

In the course of our efforts to stop the compressor station, Spectra on several occasions asked to discuss mitigation, which I rejected. Facing the pending release of FERC’s “fast track” Environmental Assessment Report and after consultation with many in town, we agreed to listen to Spectra’s proposal and discuss potential mitigation.

The package negotiated is greater than any package ever offered for a natural gas facility. But it is not enough for Weymouth to abandon its fight against an unwanted and endangering compressor station.

Unfortunately, given the rigged federal process and inaction by Congress, my decision to reject Spectra’s money and continue our fight does not make the road ahead any easier.

The fact remains that through FERC, five President Obama appointees will very likely approve this compressor station in spite of our aggressive fight and compelling reasoning. I believe the focus of our frustrations must shift. This is not a fight we can win at the local level alone.

FERC and their rigged process of allowing big utility companies to site compressor stations and gas pipeline wherever they want is a creation of Washington D.C.

I continue my call in demanding that our Congressional delegation in Washington use their power to change FERC’s rigged process and stop the federal government from putting compressor stations in densely populated neighborhoods like North Weymouth. Please join me in doing so.

Lastly, I want to thank the many residents who took the time to contact me on this important matter. It is empowering to know just how engaged and passionate residents are in helping me to fight Spectra and keep this unwanted compressor station out of Weymouth.

These are the explosive methane (*) leaks that Weymouth already has: 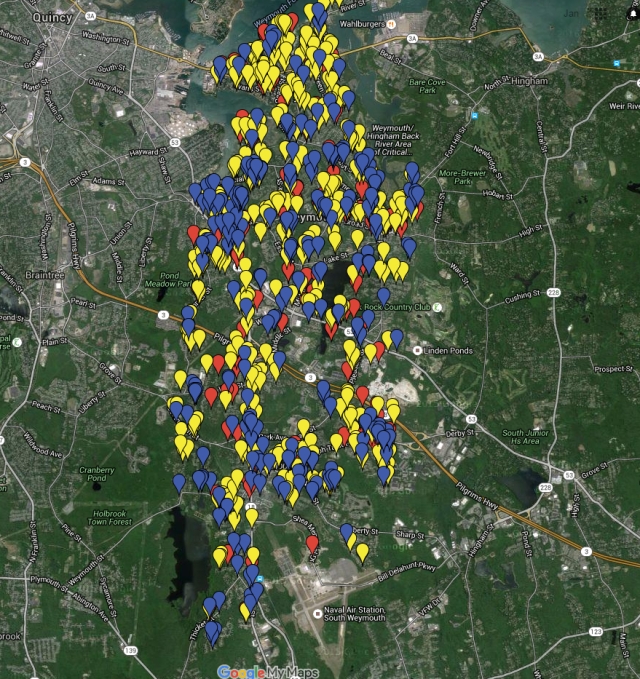 See here for more details about Weymouth and other towns in Massachusetts.

Sure, the proposed pipeline has nothing directly to do with Weymouth’s distribution system. However, Massachusetts towns are full of these kinds of leaks, some quite old, and instead of paying to fix them, the utilities and pipeline and methane companies just want to pipe more in to keep the distribution lines pressurized. This is especially bad in West Roxbury where the transmission pipeline Spectra is building exists only to pressurize a leaky distribution grid: