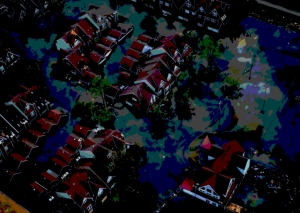 From the New York Times, the United States government has been found liable for the failure of the walls of a 76-mile-long canal which flooded a substantial portion of New Orleans after the onslaught of Hurricane Katrina.

Now the question is, to what extent can other government bodies be held financially responsible for damages due to their negligence at constructing structures which exist for the purpose of protecting homes? Suppose a Massachusetts town erects seawalls, perhaps as the result of citizen action at their town meeting, which are supposed to keep the sea out. This is known to be a poor technology for the purpose. That case was made by some citizens and the town. Now, if the seawall fails, can the residents whose homes are damaged turn around and file suit against town government or perhaps the Commonwealth? Sure, it’s hypocritical, since many of the same residents whose homes were likely to be so damaged urged on the warrant article, but nevertheless.