Bishops from around the world have appealed to the COP 21 meeting in Paris to create a “fair, legally binding, and truly transformational” climate agreement.

That’s from Vatican Radio which has the full statement. There is more coverage from the Catholic News Agency and The Guardian.

Damage to climate and environment has enormous repercussions. The problem arising from the dramatic acceleration of climatic change is global in its effects. It challenges us to re- define our notions of growth and progress. It poses a lifestyle question. It is imperative that we find a solution that is consensual, because of the scale and global nature of the climate’s impact, it invites a solidarity that is universal, a solidarity that is ‘intergenerational’ and ‘intragenerational’.

While deploring the dramatic impact of rapid climate change on sea levels, extreme weather events, deteriorating ecosystems and the loss of biodiversity, the Church is also witness to how climate change is affecting vulnerable communities and peoples, greatly to their disadvantage. Pope Francis draws our attention to the irreparable impact of unrestrained climate change in many developing countries across the world. Moreover, in his address to the United Nations the Pope said the misuse and destruction of the environment are also accompanied by a relentless process of exclusion.

There are two additional news stories about the kickoff event for MAICCA, here and here.

There is a major ACTION DAY at the State House scheduled for Tuesday, 10th November 2015.

to learn how to sign up, or to learn what more things (and there will be many!) you can do. These are our priorities.

While the Vatican statement was most comprehensively covered in the New York Times as a video, I refuse to put a link to that here, because one of the ads they pop-up prior to showing it is one by Citizens for Affordable Energy who, along with groups like Americans for Energy, are shills for fossil fuel companies. It is an outrage that they ran that, and I cancelled my Times digital subscription in protest.

The United States has about 5% of the world’s population and contributes 20% of its greenhouse gas emissions. Check out the nifty tool for comparing the commitments of various countries with one another and to the track the globe much be on to hold climate temperature to below +2°C above preindustrial. To see a specific analysis regarding the United States at Climate Action Tracker.

Bill Nye has a great elevator talk on climate, just out: 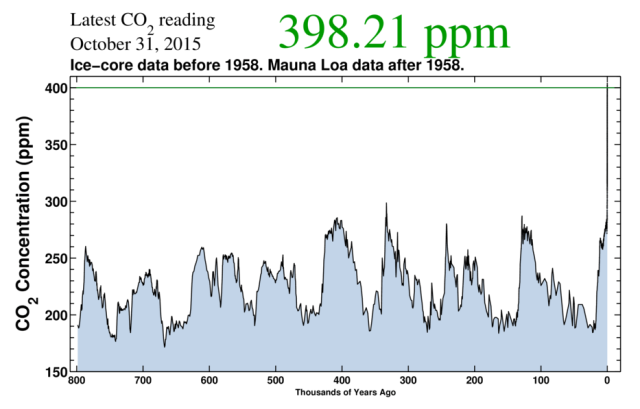