Going down to the Southern Ocean, by Earle Wilson (on the Scripps R/V Roger Revelle) 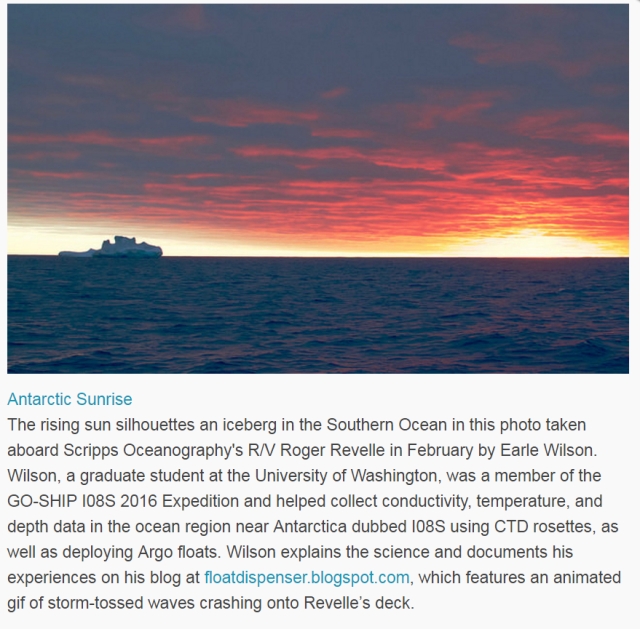 (Click on picture to see a larger image, and use your browser Back button to return to reading.)

Getting steady data from the Earth’s oceans demands commitment and not a little courage. I could never do what these oceanographers do, and I admire them greatly. Here’s a report from the Scripps:

The rising sun silhouettes an iceberg in the Southern Ocean in this photo taken aboard Scripps Oceanography‘s R/V Roger Revelle in February by Earle Wilson.

Wilson, a graduate student at the University of Washington, was a member of the GO-SHIP I08S 2016 Expedition and helped collect conductivity, temperature, and depth data in the ocean region near Antarctica dubbed I08S using CTD rosettes, as well as deploying SOCCOM Argo-type floats.

Wilson explains the science and documents his experiences on his blog at http://floatdispenser.blogspot.com, which features an animated gif of storm-tossed waves crashing onto Revelle’s deck:

“My least favorite aspect of the storm was the noise. Fun fact: when waves crash against a ship’s hull, they sound like battering rams. The banging of the waves started the moment we left port, but the storm amplified the ricochets many times over. Needless to say, I slept very poorly over those few days. As I laid in bed, I just imagined myself being trapped in a giant snare drum, hurtling down a bumpy hill.”

Led by Alison M. Macdonald of Woods Hole Oceanographic Institution and featuring several participants from Scripps, the expedition was an international effort to employ ship-based hydrographic observations to understand the dynamics, the interaction, and the predictability of the coupled ocean-atmosphere system. Read more about the overall program at http://www.go-ship.org.

Support oceanography. Give to Scripps or to WHOI.