Posted on 9 February 2017 by ecoquant

We heat and cool our home with Fujitsu `ductless minisplit` air source heat pumps. But this is New England, and it’s winter. A common question is how do they do under winter conditions?

Well, today we are treated to the increasingly rare Massachusetts blizzard, a nor’easter:

(You can see much larger versions of these images by clicking on them,
then using your browser Back Button to return to this blog.) 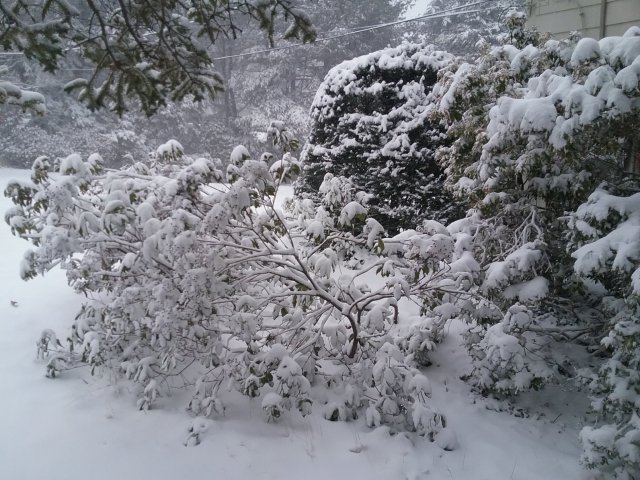 The storm producing this looks like this in EarthWinds:

It’s fed by excessively warm and moist conditions off the Northeast coast, themselves due to radiative forcing from fossil fuel emissions: 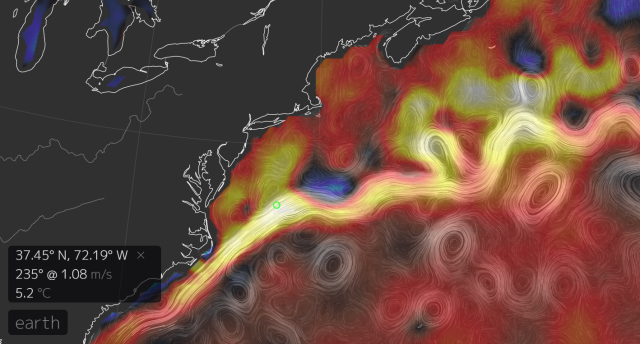 We have three minisplits. They are working fine. During a blizzard a little care needs to be taken to be sure snow does not pile up and cover the fan or the vanes which do the heat exchange, and sometimes these need to be brushed off. However, if the splits are operating at full, their built-in defrost does a pretty good job of taking care of this. They’ll continue to operate down to about -15℃ whereupon the heat pump will simply shut down. Below -12℃, efficiency drops markedly. This is a rare event, and is becoming increasingly rare. Right now, it’s about -8℃. 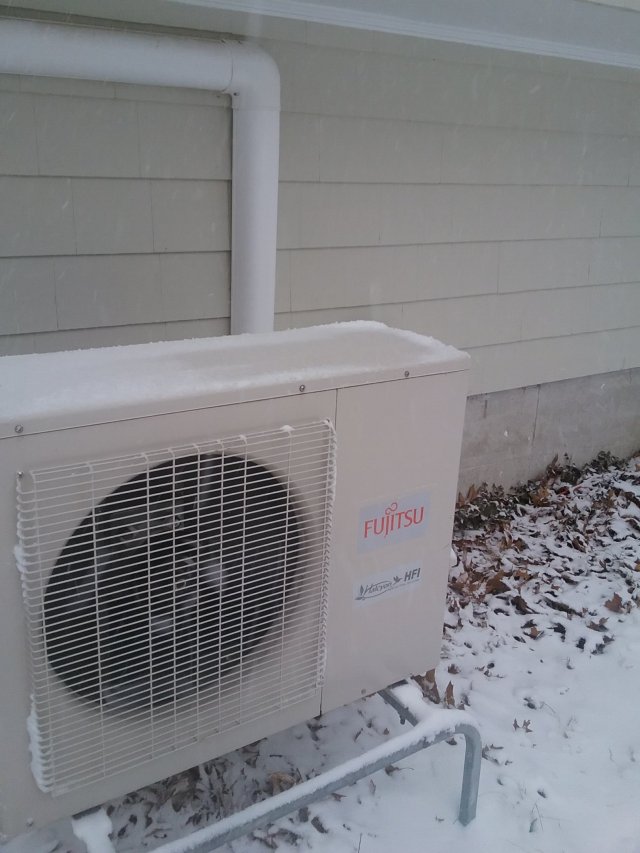 Should that occur, we crank up our now-off-and-orphaned oil furnace for the short time we need it, and shut it down when reasonable temperatures return.

And, should power from the grid go off — the power we’ve sent them during generation by our solar panels for the remainder of the year — our backup emergency propane generator kicks in, and can power essential elements of our house, including the oil furnace, but not the minisplits. Again that is a very rare event.

The generator (above) also needs snow kept clear from it.

By the way, here’s another shot of our beloved Rock Meadow Brook marsh, replete with Canada Geese, sheltering, and occasionally erupting in a burst of honks. 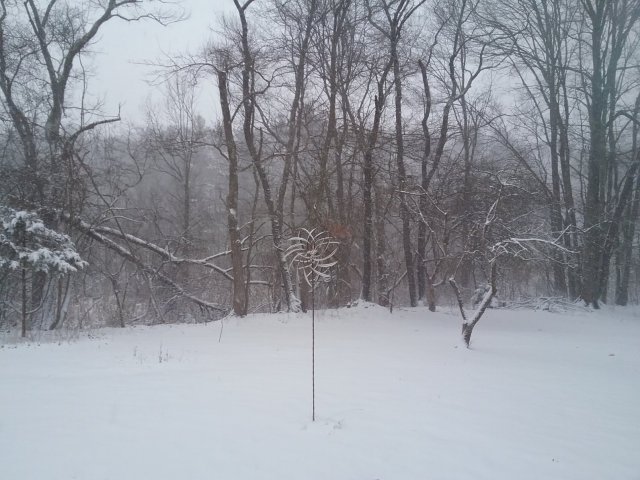 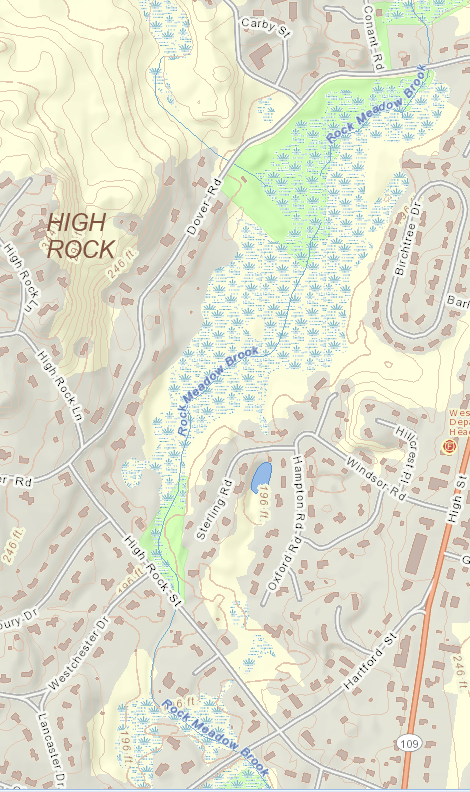 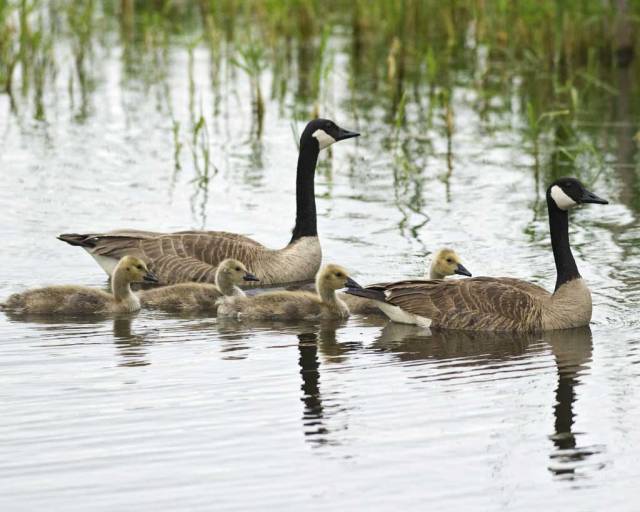 The photos above were taken just at the beginning of the blizzard. It’s good to have an after-the-fact set to compare, and to illustrate a feature of the Fujitsu minisplits. Here they are in their post-blizzard conditions.

Now, the heat exchange on the ductless minisplits happens when air passes over a fine array of thin fins at the backs of the units. The fans in the front draw air across the fins, and either heat is dumped into the air, for cooling, or extracted from the air for heating, as now. The feature of air source heat pump technology is that this heat can be extracted down to the -15℃ temperature mentioned above. All air temperature have some heat in the air, and it has nothing at all to do with differential temperature between the interior of the house and the outside.

However, in the case of inclement frosty weather, it is possible for snow to build up on these fins, interfering with their ability to exchange heat. Accordingly, because the Fujitsu units are designed to operate under such conditions, when it is present, they undergo a periodic defrost. You can see such frost on the fins of minisplit number 3: 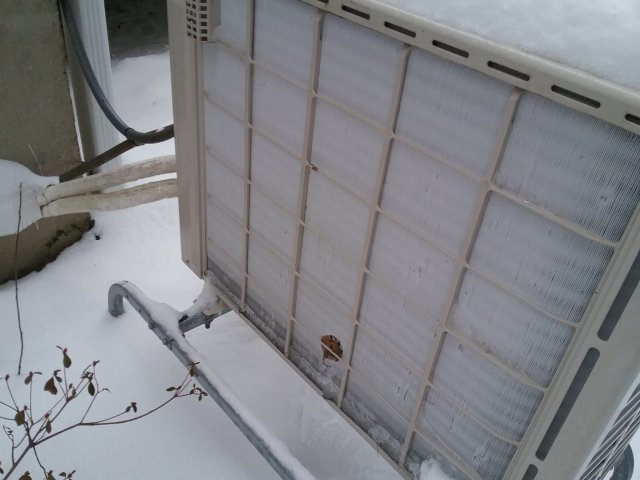 I was fortunate enough to be outside when a defrost began on unit 3, and you can see the ice melting and puddling below the unit here:

Click on the image to see a close-up. (Use your browser Back Button to return to the blog.)

Minisplits 1 and 2 had already gone through such a defrost, and their fins were clear: 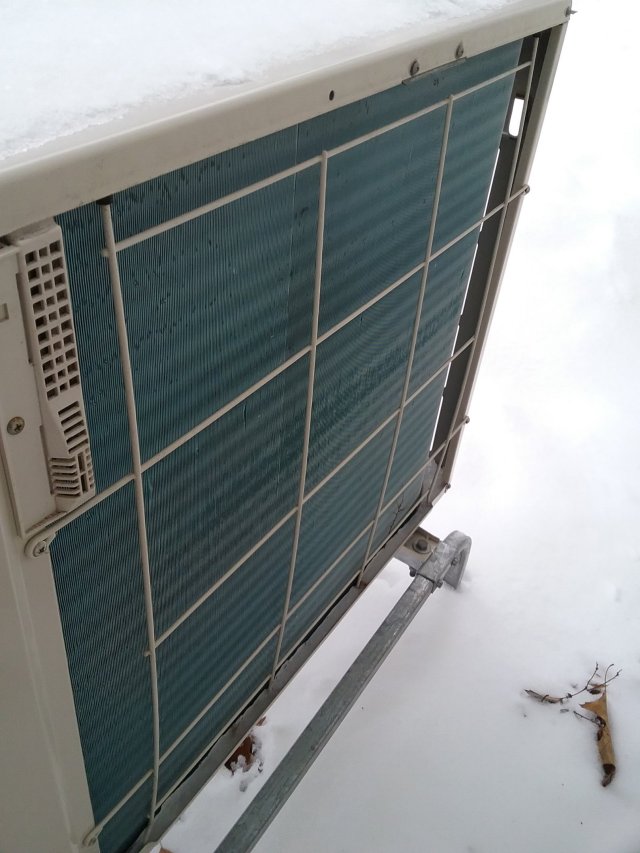 Naturally, this costs energy — electrical energy — but over the year it is not needed very often, and, so, the efficiency of the heat pumps, averaged over the year, remains a big win. Here’s a report from Sisler Builders in Vermont regarding their experiences.

This update is overdue, but I was writing up elsewhere so I thought I’d drop it in here as well:

One thing, though. We were early adopters, and we caught a bit of pain from being on The Bleeding Edge, as they say in high tech.

Our ‘splits were installed in 2014. The prime contractor was a mess, and, as it turned out, their back office was in worse of a mess, but we did not know that at the time. Eventually (2 years later) they went bankrupt. But, little did we know, that they were paying their subcontractors margins that were next to nothing. This affected the quality of their installations.

We had 3 Fujitsu units installed. One unit was spec’d and installed with a run of tubing that, after the fact, proved to be too long. Either somewhere on the run, or the stress it posed on the compressor caused it to leak. This meant it was running low. We were not happy about this, but could not complained to the prime because, well, they were out of business. We found another dealer but, as it turned out, their service wasn’t great because they felt they didn’t install the system so ….

Anyway, they nursed the long run unit along, feeding it R410 repeatedly. We did not like this at all because that’s a potent greenhouse gas, or becomes it. But because they did not do a root cause analysis and kept this up, costing us a pretty penny, we fired them. And we found someone else who was competent. They tried to fix it, working with Fujitsu, but eventually the compressor failed. Fujitsu replaced the compressor (for free to us), and that failed, too. The recommendation of the new contractor was we needed to replace the unit. We did, buying a completely different unit, a Mitsubishi. That’s worked great, but it’s only been since 2018.

At this point we would have only gotten Mitsubishi units and not Fujitsu, but we did not know and at the time (in 2014) didn’t have much of a choice.

Interestingly, the unit that failed was a copy of a Fujitsu unit we still have but is operating fine.

The space now is filled with contractors who will do these units and our systems are now under the care of someone who does nothing else.