The creatures from Trumpland are planning an Energy Week in the upcoming, probably to lead up to the Fourth of July celebrations. Our Orange Leader

… will tout surging U.S. exports of oil and natural gas during a week of events aimed at highlighting the country’s growing energy dominance.

[He] also plans to emphasize that after decades of relying on foreign energy supplies, the U.S. is on the brink of becoming a net exporter of oil, gas, coal and other energy resources.

(Brief excerpt from the Bloomberg article on the subject)

Trouble is, this defies trends and the cost curves of wind and especially solar technology, as noted by Bloomberg New Energy Finance and Lazard. Worse, as energy supplies are more constrained in their sources and demand more exotic methods to extract, either the price per unit needs to increase, or there needs to be a greater subsidy from the federal government. Fossil fuels in the USA already receive huge subsidies: Consider the FERC-directed eminent domain takings which pipeline companies receive, rather than having to buy the land their pipes cross and despoil. (In contrast, consider what Amtrak has to do for its rights of way.) As additional supplies of fossil fuel are dumped into the marketplace, prices are depressed, especially explosive methane (“Natural gas ain’t granola”).

Worse, their prices are at best constant, and, over time, increase are the reserves get rarer, whereas renewables — without subsidies — will be cheaper than costs of transmission for electricity in the early 2020s.

This is matching a linear curve with an upslope against exponentially decaying curves. Trumpland wants overseas consumption, but at what price? Cheaper than, say, coal dug in China with fewer health and workplace protections? With lower transportation costs?

What do the markets think? Trumpland is happy to quote, take credit for, and lie about increases in jobs (e.g., increases in numbers of jobs in coal as cited by EPA head Pruitt), but how have energy sources performed since the junta was in office?

(Click figures to see larger images, and use browser Back Button to return to blog.) 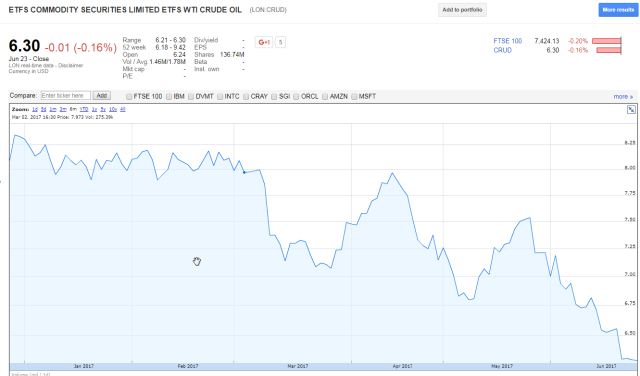 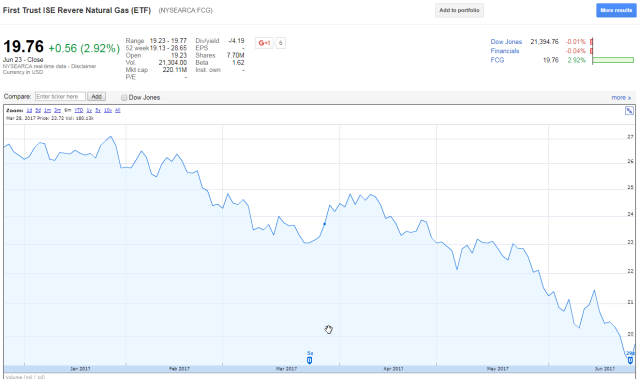 In contrast, have a look at wind and solar investment (*): 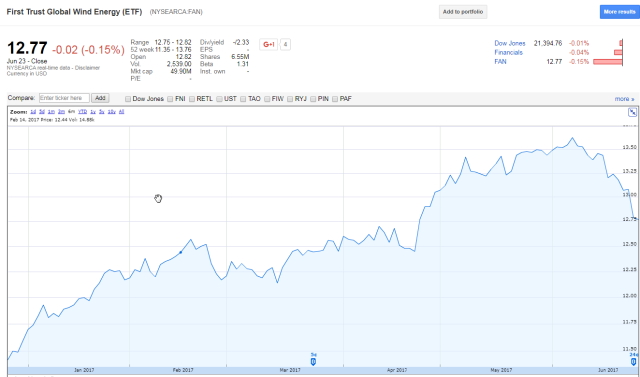 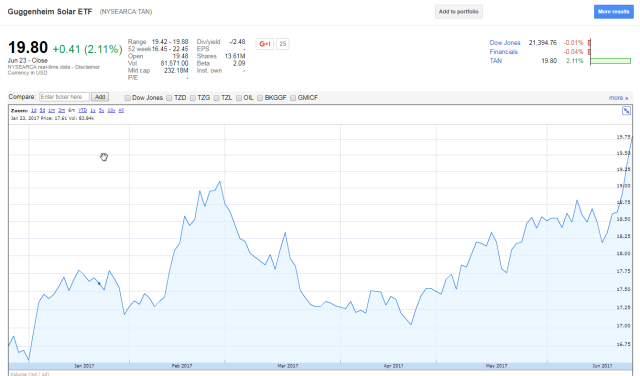 I daresay that solar via TAN:ETF has perked up recently, after a time of doldrums.

By Trumplands criteria, they aren’t doing too well. The order is tall to provide convincing evidence how the United States is going to defy headwinds, develop markets, avoid having climate damage reparations set against it, let alone financially succeed. It’s possible that Trumpland is trying to set up a protection racket, consistent with organized crime, where if the rest of Earth doesn’t want their planet trashed, then the USA should get paid off. But, if that is the objective, it speaks for itself.

And it won’t work. I’ve detailed many times elsewhere here why.

From Kevin Book of the Center for Strategic & International Studies, in his “An energy policy of dominance”, 28th June 2017:

Governments in the United States can position the country for dominance by rationalizing disparate policies that muddy price signals for private industry. For example, the $1/gallon federal biodiesel tax credit implies a CO2 price of ~$196 per metric ton. By contrast, the ¢24.4/gallon federal diesel tax corresponds to a CO2 price of ~$24 per metric ton. Federal wind energy tax credits of $24/megawatt hour imply ~$54 per metric ton, but the nine-state Regional Greenhouse Gas Initiative auctioned carbon allowances in June for ~$2.80 per metric ton. Paying green energy producers 10 to 20 times more to abate greenhouse gases than we charge fossil fuel consumers for emitting them is distortion, not dominance.

That, incidentally, shows how silly the claim of government subsidies support renewables and that’s why they’re winning is.

(*) Statement of interest: Both my wife, Claire, and I have holdings in the FAN and TAN ETFs. Also, this is not intended as any kind of financial advice. You should consult with a professionally licensed advisor before acting on this information.