Posted on 2 September 2017 by ecoquant

An exercise in the appreciation of ensemble models. By the way, many of these charts were obtained courtesy of my subscription at Weather Underground. They are, as far as I know, public domain. Unless otherwise specified, these are United States GFS ensemble members. 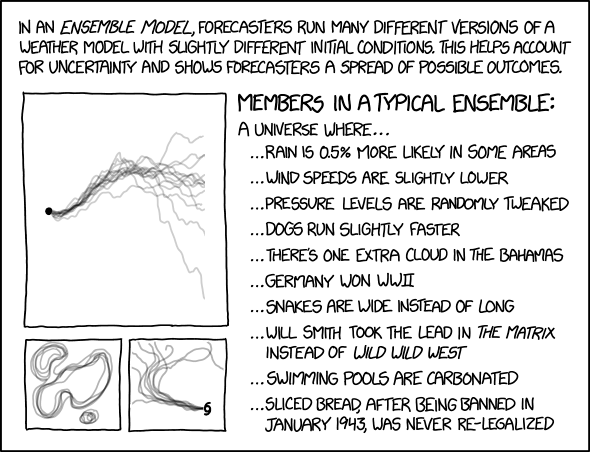 Note how the ensemble members converge towards one another as boundary conditions for a forecast become more and more certain. Also note how forecasted tracks distant in time can suddenly diverge from one another when new information is presented.

robertscribbler has a very thoughtful post on prospects for Hurricane Irma.

The ensemble model projections are looking far from safe.

Oh, oh. A continuity argument might say there’s non-zero probability on trajectories between the principal mass indicated by the white average, and the extreme rightmost ensemble member. The westernmost trajectories look like they are being discounted.

Hereinafter, ensemble model plots will just be appended, without a heading just like the above. The date of the ensemble graphic can be noted in their upper left hand corner.

Here is the most recent ensemble from ECMWF rather than GFS, courtesy of Weathernerds.org (*):

Two things are interesting about the ECMWF Hurricane Irma ensembles in contrast with the GFS ensembles:

This suggests to me two possibilities. First, it’s possible that the ECMWF ensemble set also would, in principle, behave like the GFS ensemble, but are being actively regularized. Or, second, GFS has many special cases, and asymmetries and far-field divergences are due to where these special case differences begin to dominate in contrast with the ECMWF which seems to be structurally more uniform, differing in degrees. I do not know which of these two explanations makes better sense or, if, there might be a third. And note that ECMWF ensemble does have a member where the hypothetical future Irma heads out far into the Atlantic in contrast with other members.

Alas, the constraints have not improved much:

Finally, a solid west coast of Florida preference on the track:

Both models now show a clear left-coast-of-Florida rake by Irma. I wonder how much being partly over the warm Gulf of Mexico waters is going to help maintain the hurricane’s strength?

(Click on images to see larger figures, and use browser Back Button to return to blog.)

It’s interesting that this update from the GFS ensemble shows the density bifurcating into an along-the-west-coast-of-Florida run and down the middle of the Florida panhandle:

(*) I’d like to support Weathernerds.org with a cash donation, but they don’t seem to have a link on their page for doing that. Also, their server seems (understandably) loaded right now.