‘Near classified information’ and the militarization of environmental degradation

EPA employees are currently receiving instruction in “unauthorized disclosure training,” teaching them not to leak classified or near-classified information. This training is part of a government-wide eradication effort following National Security Advisor H.R. McMaster’s memo to agency heads on anti-leak instruction earlier in the week. Agency spokeswoman Liz Bowman had said in an email last week that, “EPA is developing training to support the White House’s request.”

Some are concerned that the focus on leaks will hurt morale and inhibit normal public communication of sometimes critical information. Others observe that EPA employees broadly seem more willing to talk to reporters. In comments to E&E News, a longtime EPA employee says, “Look, we have an administrator with staff who don’t even want to talk to those of us who have dedicated our lives to the agency and the public good. The public trusts us to protect the planet and their health, and I am going to honor that trust by staying true to the EPA mission.” Another longtime EPA employee said, “What’s concerning to workers is that [the Trump appointees] have no respect for the rule of law and could do anything to retaliate, even though it’s illegal. That’s why there’s a chilling effect.”

(As reported in the 25th September 2017 Policy News newsletter of the Ecological Society of America, of which I am a member.)

The right to know, amplified at Wikipedia

Secrecy in science does not work. Withholding information does more damage to us than to our competitors. 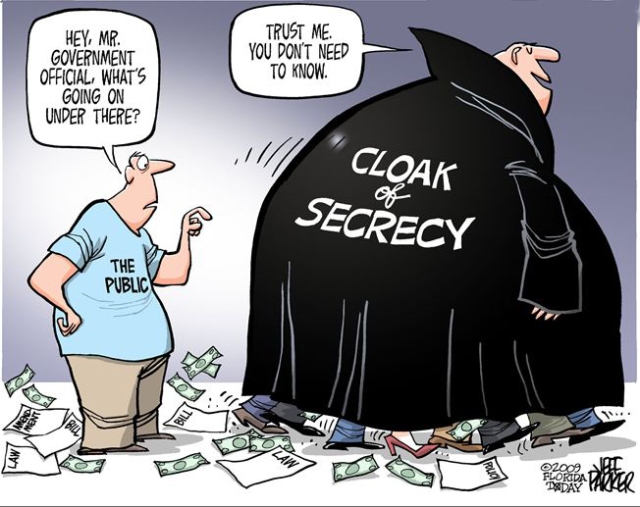 There are a number of levels of classification in the United States government bureaucracy. These range from military classifications, Unclassified, For Official Use Only, Confidential, Secret, and on up, to various kinds of compartmentalized information, classifications which respect the participation of the United States in NATO, and oddball classifications, such as at the Securities and Exchange Commission, controlling the embargo of information like interest rate increases before they are announced. The statutes and court rulings are pretty clear: In order to classify a piece of information, anyone charged with protecting it must be provided with a copy of a book or document, titled roughly, Classified Document Control Guide, which defines specifically which aspects of something are classified and which are not, and what the levels of classification are. These need to be specific — so people originating classifications know how to mark specific paragraphs in classification level — and they need to be unambiguous. Unknown to most, even some practitioners, it is a crime to classify information at a level higher than it needs to be. Diminishing empires and bureaucracies being what they are, this is seldom prosecuted. There is also supposed to be a declassification timetable attached to each piece of classified information. And there is, at least in principle, a place in government where all these pieces of classified information are tracked.

From time to time there have been attempts at creating flavors of Unclassified information, such as Unclassified But Sensitive, or Administrative Sensitive. My last briefing on these subjects, from attorneys, indicated these flavors were indefensible in court, that there was no provision under the Espionage Act under which they could be enforced, and while Presidential Executive Orders could be issued to make life uncomfortable for people who breached things like Unclassified But Sensitive, in the end, there was no defensible “damage to the United States done” and, so, a violation could not be properly prosecuted under the Act. But I’m no attorney, and perhaps things have changed, in both directions. There are, for example, now Whistleblower Protections embodied in law.

So the idea of EPA personnel being briefed on the protection of “classified information” in the context of the EPA’s work, or, amazingly, “near classified information” is striking. And it has implications. It means that, in essence, objecting to the procedures and policy which a Presidential administration enacts which might, in the opinion of a government employee, be in violation of the law and, therefore, of the Constitution of the United States, can, in principle, be prosecuted with all the heavy apparatus of military secrecy and of the Espionage Act, emboldened as it has been with counter-terrorism emphasis.

There’s always been a hint of this in the wings. J Edgar Hoover of the FBI distrusted any demonstrators for any reason, wiretapping Martin Luther King, and, through the actions and inactions of his agents, causing the death of people protesting for civil rights, including people who in practice and statement were thoroughly committed to non-violent means. It is widely believed, and in some cases documented, that environmental protestors have also been targeted for at least scrutiny, and that this information has been improperly shared with companies targeted for non-violent demonstrations.

So, to me, the idea of briefings forbidding the revelation of “near classified information” is the opening of a gambit which could end in it being declared un-American and illegal for people to not use or burn fossil fuels. That is a big stretch, I know, and extreme, I know, but the idea of imposing some kind of military discipline upon an agency which exists to review and operate in as much a spirit of transparency as it can is a gross violation of the public trust and of the public’s right to know. EPA employees report that Administrator Pruitt has armed guards, and that no one is allowed to record or take notes or cell phones or computers when they meet with him. Apart from that being fundamentally in conflict with the operation of an agency which, by statute, is required to be open and available, there is such a thing as the Government Records Act, and all meetings at the highest levels are supposed to be recorded, at least for posterity.

Accordingly, these reports are alarming, at least. Does the EPA have an Judicial Advocate office like military services do? I do not believe they do.

And perhaps, in addition to expressing concerns about policy, environmental organizations and advocates ought to be concerned about governmental process.

So what exactly is this `controlled unclassified information` about? Is it possible to prosecute someone for revealing it? Under what statute?