I love Sankey diagrams, and have written about them with respect to influence of Big Oil on U.S. climate policy, and in connection with what it takes to power a light bulb, providing a Sankey-based explanation for something Professor Kevin Anderson has spoken and written about. Indeed, there’s a wealth of computational capability in R and otherwise, for constructing Sankey diagrams and the like. Here’s a new one from Lawrence Livermore National Laboratory: 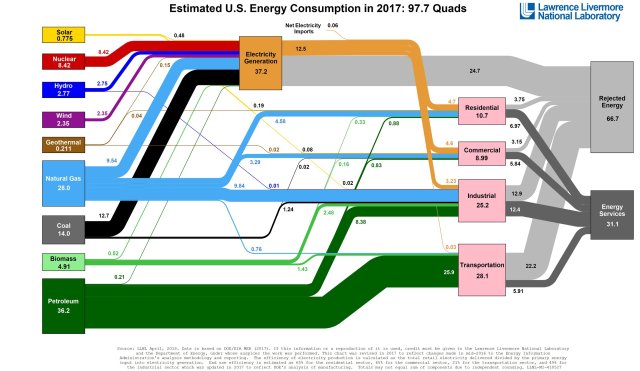 (Click on image to see much larger version, for inspection or saving. Use your browser Back Button to return to this blog.)

That’s a lot of energy consumption, and renewables have a long way to go before overtaking it. But, maybe not so much.

First of all, if the solution is, hypothetically, all wind and solar, setting aside storage, nearly all that rejected energy won’t be there. So the actual need isn’t about 98 quads, it’s closer to 31 quads. Call it 35 quads for jollies.

Second, note that wind and solar energy technology are presently on the middle part of the logistic S-curve of growth. (See also diffusion of innovations.) This is a super-exponential region. Call it an exponential region to be conservative. Current estimates place cost cuts in technology for these at 30%-40% per year. Actual adoption meets resistance of regulatory capture and other impediments, and during the last year it was 11%. Clearly with the cost advantages, the motivation is to go faster and, one can argue, the greater the spread between present sources of energy and wind and solar, the lower the “energy barrier” to jump to wind and energy despite other impediments. Translating into time, an 11% per year growth rate is a doubling time of 9 years. But a 30% growth rate is a doubling time of just 3.3 years. Say the doubling time is 4 years.

Fourth, so the really bad news for fossil fuels and all business and people that depend upon them to make a living it that:

Will that be enough to keep us from a +3C world?

Probably not: Too little, too late.

But it’ll happen anyway and it is, as I say, why fossil fuel energy and utilities which depend upon them, natural gas and all, are dead on their feet, and stranded. And any government which puts ratepayer and taxpayer dollars into building out new fossil fuel infrastructure is not only being foolish, they are making the mistake of the century.

As for the +3C climate change outcome? Clearly, that is such an emergency that the only option to address it in time is degrowth, not only cutting back on additional growth. However, there’s no evidence that that is even considered as an option. To the approvers of additional development in suburbs like the Town of Westwood and elsewhere, Conservation Commissions and all, I simply say:

You have a choice: Either manage a restrained and then negative growth plan yourself, or Nature will do it for you.

Simple. The officials responsible for these decisions know and have been warned repeatedly about these outcomes. They are ignoring them. They own the long term results. Remember them.

The Trump/Perry Department of Energy with its EIA reports solar energy in the United States grew 32% per annum since 2000. So, per the reasoning able, that’s a doubling time of under 3 years. Moreover, this is based upon a long sampling period, since 2000, so it is not only stable, it is probably conservative.