In September 2017, the U.S. General Accounting Office completed a report Climate Change: Information on Potential Economic Effects Could Help Guide Federal Efforts to Reduce Fiscal Exposure. A copy is at that link. 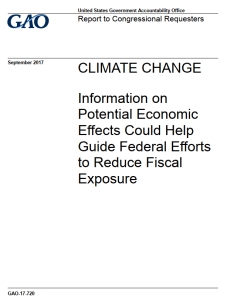 Foremost, in case anyone doubts it, there is an appreciable fiscal risk to the federal government. Quoting:

Over the last decade, extreme weather and fire events have cost the [F]ederal government over $350 billion, according to the Office of Management and Budget. These costs will likely rise as the climate changes, according to the U.S. Global Change Research Program. In February 2013, GAO included Limiting the Federal Government’s Fiscal Exposure by Better Managing Climate Change Risks on its High-Risk List.

GAO was asked to review the potential economic effects of climate change and risks to the federal government. This report examines (1) methods used to estimate the potential economic effects of climate change in the United States, (2) what is known about these effects, and (3) the extent to which information about these effects could inform efforts to manage climate risks across the federal government. GAO reviewed 2 national-scale studies available and 28 other studies; interviewed 26 experts knowledgeable about the strengths and limitations of the studies; compared federal efforts to manage climate risks with leading practices for risk management and economic analysis; and obtained expert views.

This fiscal risk does not reflect risk to the private sector. It also is not a cost-benefit analysis of taking action versus not.

While GAO identified substantial uncertainties in projections of economic damage from climate change (**), the reviews in these reports was sufficient to provide substantial guidance. 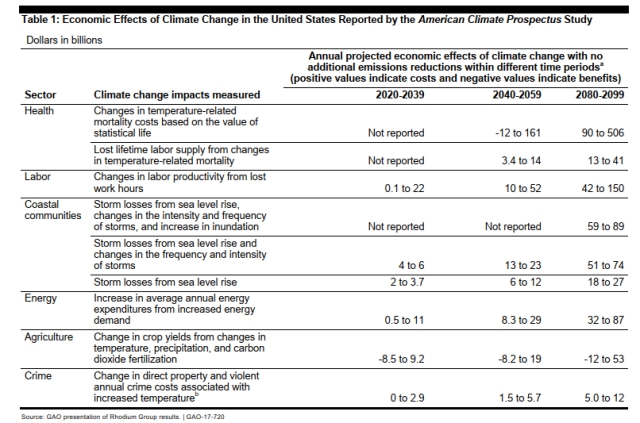 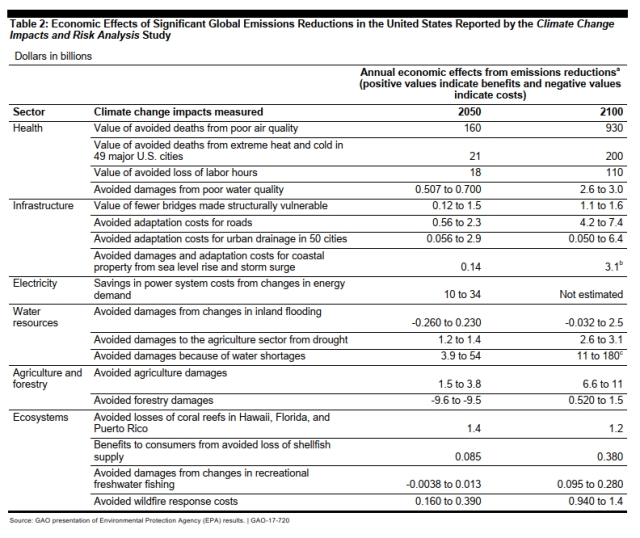 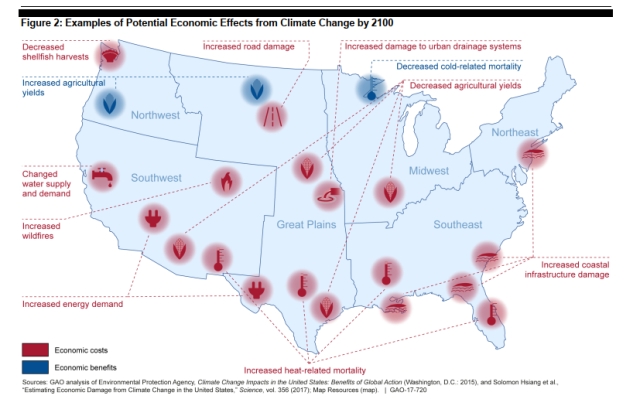 This report is useful, beyond its summary of studies of climate change economic harm, and of results and reports as others, because it provides citations and links to several other reports the U.S. GAO has written regarding climate change risk to both the federal government and to states, along with recommendations. One important recommendation was to provide a central clearinghouse of climate change related information to help states and localities plan adaptation. This is recommended in

Of course, as the report indicates in a footnote:

Specifically, Executive Order 13783 rescinded the Climate Action Plan and revoked the executive order establishing the Council on Climate Preparedness and Resilience. Although Executive Order 13693 has not been revoked, it is uncertain whether the agency adaptation plans and other strategic planning efforts it calls for will continue.

This suggests the present posture of the federal government is to accept and incur the estimated costs inflicted upon its budget indefinitely.

(*) Risky Business is hardly a “socialist plot”, as seems to be the characterization of climate change adaptation and mitigation measures by science denying Republicans and others these days. In the organization’s About Us, there’s

In October 2013, NYC Mayor Michael Bloomberg, former U.S. Secretary of the Treasury Hank Paulson, and business leader and philanthropist Tom Steyer, founded a new initiative to assess and publicize the economic risks to the U.S. associated with climate change. The project grew out of concerns by the Co-Chairs that the U.S. was not developing sound risk assessments to respond to the impacts of a changing climate. In their development of this initiative, the three founders recruited additional members to forge the Project’s Risk Committee, a group of dedicated individuals concerned about the economic future of America under the threat of global climate change.

It is big business- and investment-friendly, and seeks assessments of exposures to companies and their balance sheets from climate, similar to those advocated by BoE Governor Mark Carney. Moreover, it argues for large scale investments in climate mitigation as well as highlighting investment opportunities.

(**) Uncertainties in these projections are due to uncertainties in climate projections, as well as from incomplete and imperfect characterizations of economic activity which have exposure to climate change effects. Uncertainties in climate projects are due less to imperfections in the science (uncertainty in climate sensitivity is in my opinion particularly overplayed as an issue) and more to uncertainty in the world’s continuing profile of greenhouse gas emissions. Imperfections in characterizations of economic activity are due in large measure to companies and states failing to provide as yet a comprehensive assessments of their exposure to climate change effects. Moving them to perform and publish such assessments is the primary goal of Risky Business and of BoE Governor Mark Carney. Uncertainties in projections include substantial upside uncertainties as well as downside. For example, few if any of the studies have assessed effects of depreciation of property values due to risk and harm, or due to uninsurability. None of the studies assess risks of loss of ecological services.