There’s been a lot written about natural gas, New England, and supposed price spikes due to constraints on pipeline capacity. I’ve had my turn a couple of times here (and here), as a matter of fact (to cite a couple).

That’s why it is refreshing to put prices of natural gas in perspective. Bloomberg did so yesterday.

Second, despite “the sky is falling talk” of recent pipeline proponents, including ISO-NE, 2018 is not really much of a price spike, certainly not compared with, say, 2014:

Third, if anything, the actual trace of natural gas prices suggestions nothing anyone can do will affect natural gas prices. They will be what they will be, and additional pipeline capacity or anything else can’t impose a lid on them, as plausible as the story-and-song are from pipeline proponents. 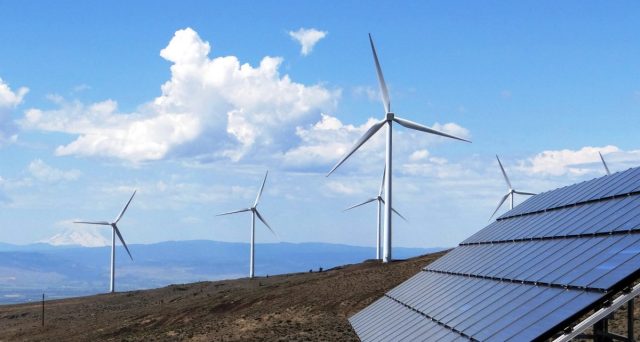 Indeed, if prices of energy, particularly electrical energy, are concerns, then the sensible way of moving forward is to make an even bigger investment, as a Commonwealth and as a region, in wind and solar energy, with energy storage added. Wind doesn’t really need the storage, but it then requires less thinking on ISO-NE’s part to manage the grid, since they seem to be less capable of doing it than, say, Belgium is. Only wind and solar can deliver constant-per-annum prices for 30 year ranges. In fact, further, if the residents of the Commonwealth are so concerned about per kilowatt hour prices of electricity, they should get over their parochial opposition to land-based wind turbines and especially opposition to community solar farms in their neighborhoods. The former is the cheapest way to generate electricity in the world, with offshore wind being much more expensive. (Why is anyone surprised about that?) Community solar is quiet, unobtrusive, and, backed by storage, can soon offer comparable energy prices.

Interesting postscript to these series …. Entergy’s Pilgram Nuclear plant went offline during the recent storm. That resulted in the following fuel-mix for electricity, using data supplied by ISO-NE:

Note it was hydropower, not natural gas or oil, which made up for the shortfall.

A model energy policy for any state in New England, proposed here for Massachusetts. I’ve done a lot of studying of energy policy in the past year, and this gleans the absolute best from the likes from Dr Amory Lovins, Professor Tony Seba (see also), the Institute for Local Self-Reliance, and Sir Richard Branson.

The Conservation Law Foundation (CLF) provides a detailed recap here of the recent cold spell in New England, its effects upon the electricity grid, the propaganda put out by gas and pipeline company associations as well as utilities, and what the real story was. An excerpt:

Clean Energy and Hydropower Kicked In to Fill the Gas Gap
One of the reasons the electricity system could easily handle this significant drop in gas-fired power was the performance of renewable energy and hydropower. During the interminable cold, these clean resources represented as much as 20 percent of our power. That’s right: clean energy was matching our gas-fired power.

Among those renewables, wind was leading the way while individual solar units were powering homes and business, keeping down demand for electricity from big power plants. So, if clean renewables flourish during these period of cold, why would we ever invest in more of the polluting gas that causes price volatility rather than clean, price stable, renewable energy?

The Grid Relied Too Much on Oil-fired Power, But It Needn’t Have
Much has been made of the fact that dirty oil was the fuel of choice for power generators when temperatures dipped to their lowest. But this spike in oil use is a direct result of our over-reliance on gas. It should concern us, but it’s important that we put it in perspective.

First, even with increased oil usage over the past couple of weeks, oil-fired power will constitute a tiny fraction of our overall power generation for the year. That means climate impacts from its overuse during the cold snap is minimal. Second, oil dominated in part due to an ISO-New England program that favors oil as a substitute for natural gas over other, cleaner alternatives. Generators switch to oil because ISO-New England gives them an incentive to do so.

Fortunately, our region is in the process of major investments in new clean energy that will be cheaper (and cleaner) than oil. Our ongoing clean energy investments will displace oil and gas polluters during future cold spells.

Electricity and Gas Prices Were High in Much of the U.S.
The extremely high price of gas resulted in a spike in electricity prices, a concern for each and every one of us when trying to pay our bills, and especially for low-income and vulnerable communities. But contrary to the gas industry’s fear-mongering, expanded gas pipelines won’t help. Indeed, gas prices were high over the last couple of weeks virtually countrywide.

Pennsylvania, New Jersey, Maryland, and a few other states that sit on top of large gas supplies and have built out their pipelines also saw their electricity prices spike during the cold weather – at times outpacing the spikes in New England. We saw the same phenomenon in 2014. So, even if we were willing to pay billions for new pipelines that will sit idle 95 percent of the time – and could stomach the high costs to our environment and climate – it’s clear that such a buildout is not the solution to high winter electricity prices. We can only achieve that by cutting our reliance on gas in favor of clean, price stable, renewable power sources.

What’s more, New England has been seeing its wholesale electricity prices decline steadily for three years, and the temporary increases associated with this recent arctic air are not likely to derail that trend.

New Pipelines Just Don’t Make Economic or Environmental Sense
If big new gas pipelines are the great solution claimed by Big Gas, then why don’t they invest their own money into the projects? Instead, they’d rather we the consumers take all the risk while they and utility companies take all the profits. We know a bad deal when we see one, though, and studies from the Massachusetts Attorney General’s Office and the Maine Public Utilities Commission, as well as from a few of the top energy consulting firms in the U.S., demonstrate that new pipelines will cost us much more than any supposed benefits.

Rather than saving New Englanders money as Big Gas likes to promise, new pipelines would end up costing those who pay a monthly electric bill as much as $277 million over the lifetime of the pipeline. This, along with serious legal issues, is why state courts and utility commissions have rejected pipeline proposals like Kinder Morgan’s Northeast Energy Direct pipeline and Spectra’s Access Northeast proposal.

Even more about this discussion at CleanTechnica.