Natural Gas Companies are Doing Themselves In

As I wrote before, there will be no Golden Age of Natural Gas. The climate periodical DeSmog Blog now reports on its outright dissolution.

But the surprise is that natural gas miners, particularly shale gas miners, are apparently destroying themselves. This comes from an an article at DeSmog Blog recounting a talk by Steve Schlotterbeck, a former shale gas CEO. The following quotes the DeSmog Blog article heavily, but I have added material found in the public domain from Schlotterbeck himself and from gas and oil industry trades.

Steve Schlotterbeck, who led drilling company EQT as it expanded to become the nation’s largest producer of natural gas in 2017, arrived at a petrochemical industry conference in Pittsburgh Friday morning with a blunt message about shale gas drilling and fracking.

Actually, this was at the Northeast Petrochemical Exhibition and Conference held on 20th June 2019. Mr Schlotterbeck’s full slide deck is available.

“The shale gas revolution has frankly been an unmitigated disaster for any buy-and-hold investor in the shale gas industry with very few limited exceptions,” Schlotterbeck, who left the helm of EQT last year, continued. “In fact, I’m not aware of another case of a disruptive technological change that has done so much harm to the industry that created the change.”

Schlotterbeck is not the first industry insider to ring alarm bells about the shale industry’s record of producing vast amounts of gas while burning through far more cash than it can earn by selling that gas. And drillers’ own numbers speak for themselves. Reported spending outweighed income for a group of 29 large public shale gas companies by $6.7 billion in 2018, bringing the group’s 2010 to 2018 cash flow to a total of negative $181 billion, according to a March 2019 report by the Institute for Energy Economics and Financial Analysis.

But Schlotterbeck’s remarks, delivered to petrochemical and gas industry executives at the David L. Lawrence Convention Center in Pittsburgh, come from an individual uniquely positioned to understand how major Marcellus drillers make financial decisions — because he so recently ran a major shale gas drilling firm. Schlotterbeck now serves as a member of the board of directors at the Energy Innovation Center Institute, a nonprofit that offers energy industry training programs.

His warnings on Friday were also offered in unusually stark terms. 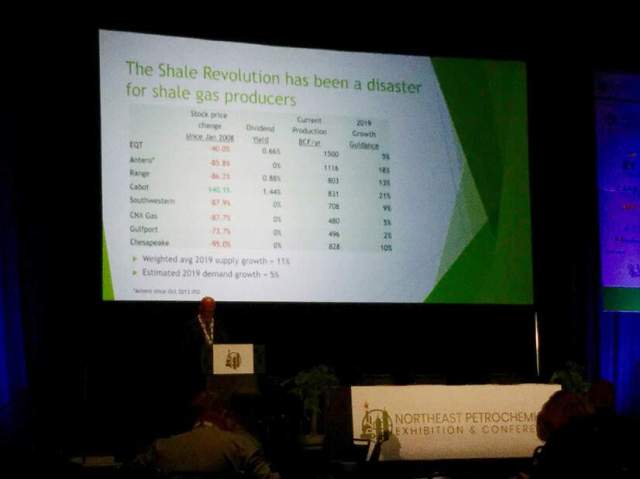 “The technological advancements developed by the industry have been the weapon of its own suicide,” Schlotterbeck added, referring to the financial impacts of shale gas drilling on shale gas drillers. “And unfortunately, the industry still has not fully realized how it’s killing itself. Since 2015, there’s been 172 E&P company bankruptcies involving nearly a hundred billion dollars of debt.”

“In a little more than a decade, most of these companies just destroyed a very large percentage of their companies’ value that they had at the beginning of the shale revolution,” he said. “It’s frankly hard to imagine the scope of the value destruction that has occurred. And it continues.”

At the Friday conference, he displayed a slide showing the stock prices of eight major Marcellus shale gas drillers: Antero, Range Resources, Cabot Oil and Gas, Southwestern Energy, CNX Gas, Gulfport, Chesapeake Energy, and EQT, the company that Schlotterbeck ran until he resigned in March 2018. Seven of the eight companies saw their stock prices fall between 40 percent and 95 percent since 2008, the slide showed.

“Excluding capital, the big eight basin producers have destroyed on average 80 percent of the value of their companies since the beginning of the shale revolution,” Schlotterbeck said. “This is not the fall from the peak price during the shale decade, this is the drop in their share price from before the shale revolution began.”

“Nearly every American has benefited from shale gas, with one big exception,” he said, “the shale gas investors.” 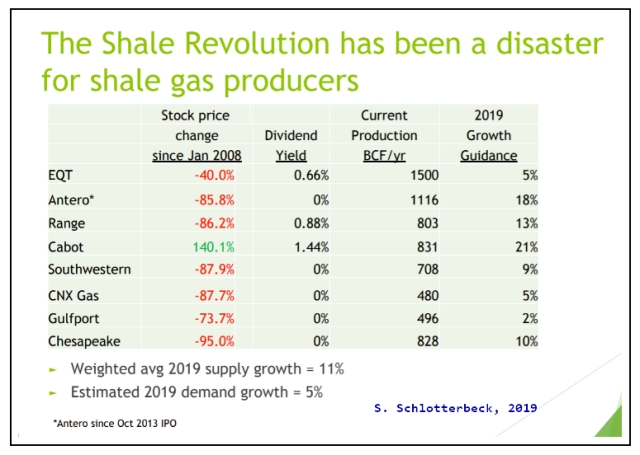 Residents of communities where shale gas drilling and fracking have caused disruptions and health issues might take exception to Mr. Schlotterbeck’s categorical description of the beneficiaries of shale gas, as might climate scientists who have warned that the shale industry’s greenhouse gas emissions are so severe that burning gas for power may be worse for the global climate than burning coal.

Only Cabot Oil and Gas, which owns the rights to drill gas from roughly 174,000 acres, mostly in one county in the northeastern corner of Pennsylvania, saw its stock price rise since 2008, according to Schlotterbeck’s presentation.

Cabot remains at the center of disputes tied to water contamination, a gas well blow-out, and other problems in Dimock, PA. One major lawsuit in that dispute was filed against Cabot back in November 2009 and legal battles have continued since. The company has denied liability and settled on undisclosed terms with landowners along Carter Road in Dimock.

Schlotterbeck made no mention of Dimock, focusing his remarks on the economic decisions made by the shale gas industry’s corporate management and boards of directors — not just in the past, but also in the present.

“The fact is that every time they put the drill bit to the ground, they erode the value of the billions of dollars of previous investments they have made,” he said. “It’s frankly no wonder that their equity valuations continue to fall dramatically.”

Can’t happen soon enough in my book, even if they are hoping for an upside. I can’t seen how that will happen, with increasing prices. Of course, they could (try to) get a subsidy from the present federal government, but it would have to be using another so-called emergency declaration from 45.

There was also coverage by oil and gas industry periodicals. One or two are claiming the overall talk was positive, emphasizing Cabot’s performance. For example,

There’s another parse: The shale gas drillers understand they may be a day soon when they cannot afford to extract gas, even at the economies of fracking, where it’s done in part because environmental costs are imposed upon local communities’ water supplies and causing structural damage to homes and buildings. So they are in a panic and spending investors’ capital with the hopes that they recover as much of the explosive methane as possible so they can do something with it.

On the other hand, Schlotterbeck has continued to acknowledge the pipeline situation, particularly in the eastern United States, is a big headache. That’s terrific.

1 Response to Natural Gas Companies are Doing Themselves In