There is a related package, dlm by the author of one of the textbooks. The dlm package has a vignette. The “CRAN Task View” on time series analysis says “dlmodeler provides a unified interface to dlm“. Also, the code and the book make reference to the first edition of Durbin and Koopman.

I tested the smoothing functions of the package. I would like to use its prediction capabilities, especially dlmodeler.fit.MAD, but that in turn calls dlmodeler.forecast and that’s still in development, per

Note
Currently, the function only works for univariate time-series.
Currently the implementation is very slow, but its speed will be increased in future versions of this package.

Anyway, I wrote some R code that exercises some of this. The second example in the script also needs this R image file for data. That data is available here, specifically at this link, and the accompanying paper is

On the subject, there is important discussion here, and in this recent paper, which models the matter using dynamical systems and invokes a transfer function interpretation. Being an engineer, I understand that and find that illuminating. (Accordingly, that paper by Orlić and Pasarić deserves its own response, something which I, at present, lack the time to do.) Note, however, that sea level rise is a non-linear process, and how quickly and how rapid depends upon ice sheet mechanisms we poorly understand, but are learning.

The second example produces this figure: 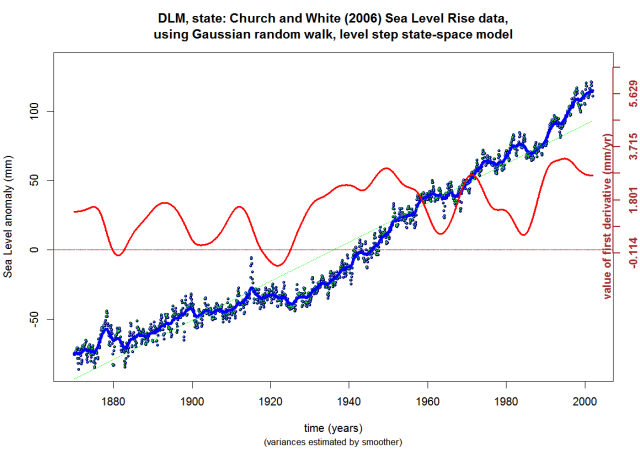 (Click on image for a larger version. Use browser back button to return.)

And speaking of sea level rise …..

By the way, if you are into Python and especially Python 3, check out the pykalman module. Incidently — and gratuitously — Anaconda Python from Continuum.IO just rules.