To the climate community this is nothing at all new, but I spotted these time series today and thought they would make a nice exhibit on how something people have direct control over, greenhouse gas emissions, affect a “teleconnection mechanism” which is part of month-or-two climate and thereby weather. Greenhouse gases affect climate by impeding Earth’s emission of infrared energy, known as “outgoing longwave radiation”. This throws the blackbody radiation out of balance, and, accordingly, the atmosphere needs to warm up in order to come back into balance, meaning in accordance with the First and Second Laws of Thermodynamics (Physics). Well, that the warming occurs is indisputable, unless Physics is inconsistent, which we know collectively from experiment that it is not. But the mechanisms whereby the extra energy gets mixed around in atmosphere and through the rest of the climate system, such as the oceans, is more complicated. 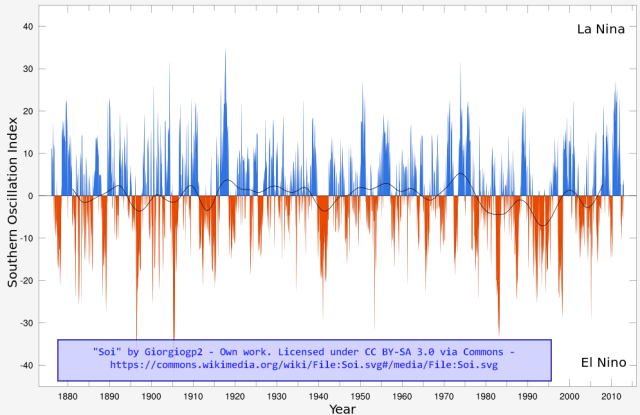 Well, in a recently released report on ENSO for September 2015, NOAA showed this figure, which I annotated to make the point:

To make a causal connection is more involved since why might not OLR be controlled by SOI? In fact, they are coupled, as in the sense of a coupled system of differential equations. When one of the quantities is altered, like OLR, no matter how, it affects the remainder of the equations. Indeed, for such systems, the idea of “causation” is a big too weak a concept to describe what’s going on, since these are all about cycles of feedbacks.